On November 14, 2018, Cuban scholar Raudel Ferrer 范力冉（Fan Liran) experienced a similar scenario described in the poem of Tang Dynasty poet He Zhizhang. Coming to China for the first time in his life, unable to speak any Chinese language, Raudel never lost faith in finding his original family in TaiShan, China. He is the third generation of a Chinese immigrant to Cuba, his grandfather 甄锐康(Zhen Ruikang) left China, at the tender age of 17, to seek for a better life in Cuba. No one could have imagined that it would take more than half a century for these families to reunite. 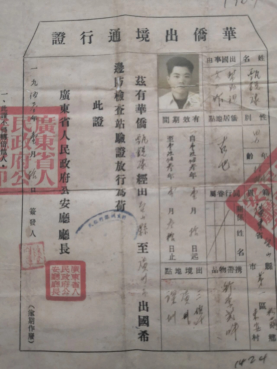 Raudel Ferrer is an exchange scholar from Cuba University of Matanzas to China Studies program in International School of Jinan University. His grandfather 甄锐康, 84 years old, currently lives in Cuba under his care. Raudel has little resemblance of Chinese heritage in him from the physical aspect. When he introduced himself as a Chinese descendant in the first day of class, we, as his classmates, were all skeptical about his background. It seemed unbelievable at the time.

Jinan University does a spectacular job in linking domestic and overseas Chinese people from all around the world. Renowned for its diversity of faculty and students, Jinan stands out among other Chinese universities with its unique feature of being a school for the Chinese diaspora all over the world. In an academic event hosted by the department of International Studies, we met with Professor Evelyn Hu-Dehart, an experienced historian from Brown University, US. Evelyn's moving seminar on Chinese Diaspora Studies in the Global South: Latin America and the Caribbean, Asia, Africaimpressed the audience with the graphic contents of the hardship endured by Chinese immigrants in Latin America in the 19thcentury. It was Evelyn who connected me with Raudel and encouraged me to join the mission of finding Raudel's lost family. And that sets in motion the story that I write in this article. In a fashion of divine provision, Evelyn also introduced us to Professor 黄卓才(Huang Zhuocai) from the Academy of Overseas Chinese Studies of Jinan University. Professor Huang is also a native from Taishan, author of the recently published book 《鸿雁飞越加勒比——古巴华侨家书纪事》, in which he narrates his personal stories with his father in Cuba. Huang's knowledge and connections with Taishan were the catalysts for Raudel’s successful family reunion.

Raudel brought with him from Cuba documents and photographs long treasured and carefully catalogued by his grandfather. These antique hand written papers provide a vague account of whatmight be the location of his families. After reaching out to Professor Huang, a clue emerged that eventually brought the whole story to light. Advance in telecommunication technology also played an important role in bringing the families back together. In the past the only way of communication was writing letters, letters that easily get lost in the tossing waves of social turmoilsin Cuba and in China. Raudel’s grandfather kept in good touch with his family in China, at the early years. He was able to send letters and remittance back to Taishan. His financial aids to his brother in Taishan were very significant in the 60s and 70s. Unfortunately, the communication was cut off in the 80s. The photograph above shown is the family portrait of Raudel’s great uncle 甄锐华in Taishan. The four children in the photograph are now white-hairseniors. Although they’ve never met 甄锐康in person, they were well aware of his existence and keenly refer to him by the name of uncle Kang. Growing up, they used to hear tales of uncle Kang in Cuba and, for many years, gratefully received vital financial help from him. They kept photographs from uncle Kang, treasured every trace of his life in Cuba. The photographs beloware offsprings of uncle Kang in Cuba, he married a Cuban locale and they had two daughters, the girl in the middle is Raudel’s mother. After losing contact from uncle Kang and to give his father relief, the eldest son of 甄锐华was committed to finding him. As last resort, he sent a fellow to search for uncle Kang in Cuba with his photograph as leading clue. Unfortunately, they never heard back from the traveler. For the following 34 years, the 20,000 km distance stood poignantly between the family, one part in China and the other in Cuba, leaving two sides unresolved of each others’ fate.

Fortunately, economic development and technological advance in today’s China afford the essential means to overcome the distance. With the help of professors and fellow students of Jinan University, Raudel finally arrived at the home of his great uncle in Taishan. Great uncle甄锐华is now a 86 years old senior, who in person resembles his own grandfather 甄锐康. With his Huawei smart phone in hand, Raudel held his phone carefully to make sure it has full 4G signal to receive a video wechat call from Cuba. This epic moment of a family reunion, across continents and over decades of time, attracted the local media to report on the story. At 10:00 am in China, the call came through. On the other side of the globe with 12-hours time difference, dark and late at night, Raudel’s grandfather was moved to a specific location that has internet coverage to engage in this video call. Despite the small screen of a mobile phone and unstable internet connection in Cuba, Raudel’s grandfather finally met his dear brother. 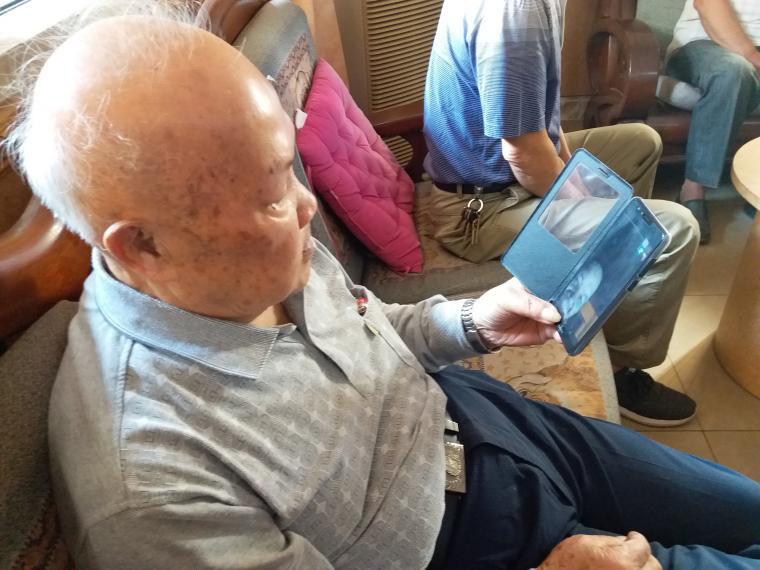 To our surprise, seeing each other for the first time after more than 60 years of separation, the old brothers were calm and patient. Theymeticulously gazedon the video screen trying to catch a clearer image of the other, demonstrates the enduring brotherhood that bonds the two men, though in their 80s, across space and time. For most of the time they remained silent, quietly contemplating the tangible distance between the two. It was a bittersweet encounter.

After the revolution, Cuba’s economic development remained stagnant. Even with the literacy rate of 99% of the population, Cuban average income is roughly equivalent to 30 US dollars which accounts for only 1/10 of Chinese average income in the small cities. No matter how hard they work in Cuba, is it impossible for Raudel’s grandfather to afford a plane ticket to come back home. China in contrast, after40 yearsof Economic Reform and open up,has become the second largest economy in the world. The different living standards between the two families are evident. For instance, the families in China can enjoy full coverage of 4G service anywhere they go, while the families in Cuba had to move to certain location to get a signal. The families in China own 4 private automobiles of Chinese and Foreign brands, while in Cuba ordinary citizen cannot afford a car, let alone a modern or a luxury one. While food is barely enough for Raudel in Cuba, his young cousin in Taishan, which used to be a village, can frequent fancy Western food chains like the Burger King and the Starbucks. Living condition is so much better in China nowadays. Chinese families emphasize universal love regardless the circumstances, that families should remain close and united throughout the good and the bad times. These family values survived sweeping waves of modernization. Naturally, all the family members welcomed Raudel with open arms. This made him feel like at home, as a part of the Chinese family. They conveyed so much love and appreciation that were beyond his anticipation. His young nephew approached him with friendly gesture wondering who this foreigner guest is.Raudel happily embraced him to take a photograph. After learning Raudel’s identity, the child bonded with him quickly eager to learn more from his foreign background.

A family portrait was finally made, in the front gate of the three stories home of Raudel's great uncle. Our fellow classmate Priya from India who came as moral support for Raudel, charmed the local families with her fluent mandarin and great sense of humor, so we were all invited to the family portrait. A small gesture with great significance to our hearts. We were proud of our identities as Jinan’s students, so well-equipped to form friendly bridges between China and our nations. It was the first time ever that I engaged in this kind of international affair. It is enormously rewarding to bring the lost families back together. Even though I was an interpreter between Chinese and Spanish, there was a visible strong family tie that needed no translation. No matter how deep the ocean nor how many years passed by, the blood lineage of Raudel with his Chinese families remain intact. To make full use of technology available to us nowadays, Priya and I helped Raudel set up a wechat group where he added all his family members to keep contact. Language is no longer a barrier with wechat’s translation function, this Chinese App certainly decoded the essential needs of local and overseas Chinese people and offered solutions.

As a formal gesture of welcoming to Raudel, his uncle and aunt gave him red pockets 红包and officially invited him to spend the upcoming spring festival with them in their home. From now on this family has turned to a new chapter of prosperity and joyful reunion. This experience reminds me of a savvy saying in Chinese:

nothing is impossible to a willing heart.

Special tributes to everyone that took part in this journey, what seemed to be a mission impossible for Raudel and his grandfather was finally accomplished!